Dialogue optimization is defined by these main aspects:

While most settings are pretty straightforward, given the multiple combinations possible when mixing variant strategies and optimization goals, deciding which to use can sometimes pose a challenge.

Using the "Automatic" optimization, you let BlueConic perform the optimization for you. This strategy is based on a self-learning mechanism that continuously monitors historical data gathered from all variants and serves to visitors more often the variant(s) that are achieving the Optimization Goal at the highest rates at the given time. Over time the performance of variants can vary and the "Automatic" strategy will change the variants it is serving based on the current situation. The "Automatic" strategy is best used in the following scenarios:

The "A/B Testing" strategy selects a variant at random from the optimizer and serves the same variant to the unique visitor from then on each time they visit your website.You can define the distribution percentage for each variant in the variants table above in the Optimization window. BlueConic will distribute the variants among visitors based on the ratios you define in the Distribution column. This strategy is best used when:

Consider the following example: You are offering a discount on the sale of an item but don't know whether it is better to offer an exact monetary savings value or a discount based on a percentage of the full price. Which is better?

Variant A offers a 20% discount off the full price of an item while Variant B offers the concrete amount of $15. By serving each message exclusively to two groups of website visitors, you can determine over time which of the offers is more appealing.

Another example: You have three variants containing messages that range from formal, to informal, to highly personal:

Some visitors will be more engaged by the formal, some by the informal, and some by the highly personal. Here, A/B testing will serve a consistent message over time.

The "Rotating" strategy is best used when:

When using the "Rotating" strategy, the variants are definitive and you typically will not add any more to the optimizer during the evaluation period.

For example, the following three banner variants have been added to an optimizer and will be shown on a rotating basis at the same position on the web page: 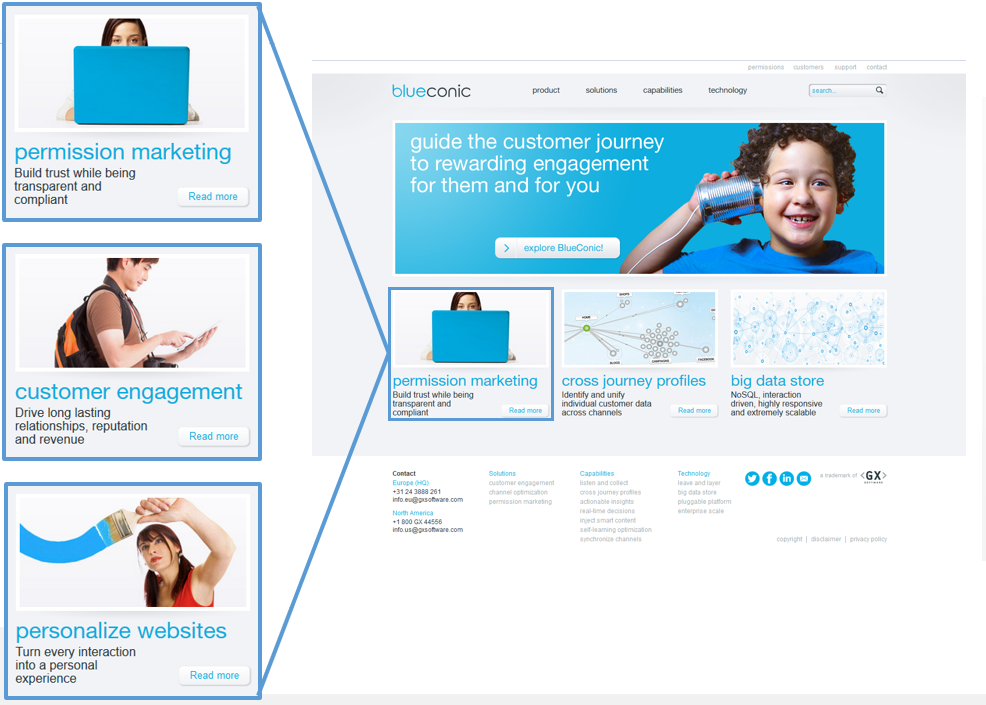 The messages contained in these three variants are all different selling points but at the same time they are equal and do not conflict with each other. Because you do not know which selling point will be most effective, you want each visitor to see all three variants in order to spread all messages equally. Are visitors more influenced by the ability to enhance their website through personalization, comply with online privacy regulations or create long lasting relationships? Or are they influenced by the fact that they can both add personalization and comply with online privacy laws using your product? The "Rotating" strategy makes it possible to engage your website visitors with a differing message for each visit.