The Funnel Visualization Insight displays your customers or visitors reaching various touch points in a multi-step funnel. To be able to use the insight you need to configure Funnel listening to define the touch points for each step in the funnel and collect that data.

The graph above displays four steps that together form the funnel. These steps are taken directly from the configured Funnel listener. The first step is shown on top, with the next step below, and so on. For each step the number of unique visitor profiles is shown in a bar whose width is relative to the widest bar.

Important characteristics of each step are shown:

Find details on abandoners by clicking the "Abandoner details" link: 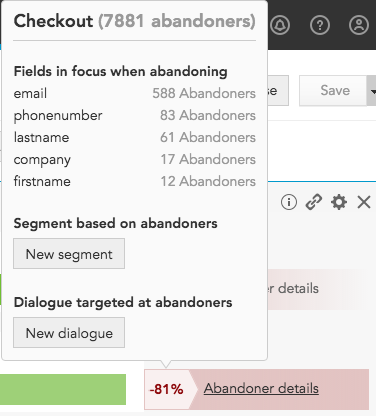 If the step displayed a form, the details will display an overview of which field was in focus for how many of the abandoners.

To help you recapture abandoners, the detail offers two buttons:

Funnel listener
Select the Funnel listener that defines the steps of the funnel. The pulldown menu automatically picks up all active Funnel listeners.
Segment
Restrict the data used for the graph to the selected segment. By default this is "All Visitors," meaning there is no restriction. Search another segment if you want to limit the scope of the graph.
New visitors
Determine whether or not new visitors should be included in the graph. If you deselect the checkbox only visitors who progress though the entire funnel starting from the first step will be displayed.